What Exactly is a Potager Anyway? 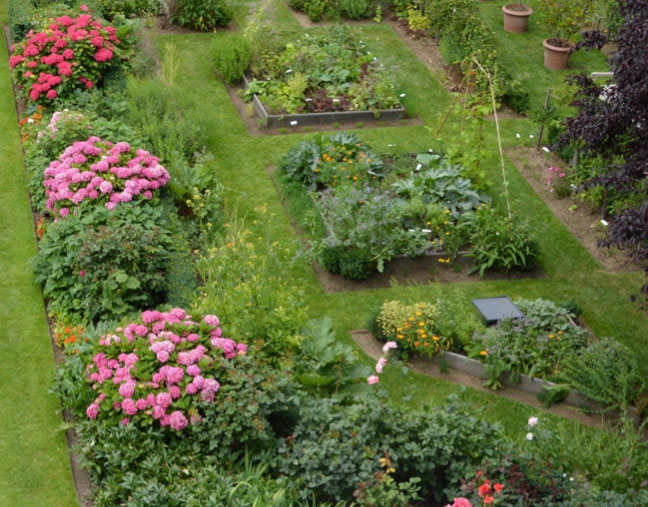 There are a multitude of books written on the history and construction of potager gardens.  An internet search on “how to potager garden”, returns over a million results, including over 150,000 videos.  Amazon lists 643 books on the subject.  So what exactly does potager mean and what is it?  What can potager gardening do for us?

The French have preserved so many of their distinct traditions, including how they design, plant, and tend the kitchen garden, or as they know it, the potager.  The use of the word potager in France, according to the Oxford Dictionary, dates back to the mid 17th century, taken from jardin potager – ‘garden providing vegetables for the pot’.  The potager allows great diversity of form and content, evolving over the centuries to accommodate contemporary needs and preferences.  Potagers were born of necessity: they provided food, medicinal plants, fibers, and flowers at a time when self-sufficiency was the only option.  The earliest formal potagers were highly organized, with distinct boundaries for the compartments in which vegetables, herbs, fruits, and flowers were grown.  Formal potagers, often in the form of parterres, grace the grounds of many French châteaux.  These potagers are on display, to impress viewers with their elaborate designs and brilliant execution.  Formal potagers were also hidden away behind monastery walls, where they served a primarily utilitarian purpose.  Herbs from the potager are primary ingredients, along with alcohol, in monastic medicinal tinctures, such as the liqueur Chartreuse.  Maximizing crop production likely drove utilitarian monastery and cottage potagers toward more organized designs and implementation.

Informal potagers became fashionable during the French Renaissance.  These gardens were originally not on public display, but situated at the back of the house, with easy access from the kitchen.  Rather than planting according to a strict design, informal potagers are planted in a manner that resembles an English cottage garden, only tucked out of site, with some veggies, herbs, and fruits doing their own thing next to the roses and clematis.  As with their formal counterparts, there are a number of opinions on the what, how and where of informal potagers.  You guessed it, there are books written about that as well.

What really matters is what a potager can offer today’s gardening enthusiast. Remember last week’s posting about planting companions?  Just planting marigolds in the vegetable garden is a step toward potager.  Okay, a very small step.  Formal, informal, and everything in-between, when used in the appropriate setting, a potager can provide great sensory and textural appeal to one’s garden.  A potager is more than the sum of its parts.  It allows small space gardeners to have it all, just steps away from the kitchen door.  A potager is a great way to grow your own veggies in the front yard if the back or side yards are too shady.  Potagers can be integrated into existing landscape and impress visitors, just as they do at the great châteaux of France.