To Carve or Keep – Are You A Pumpkin Carver Or Hoarder? 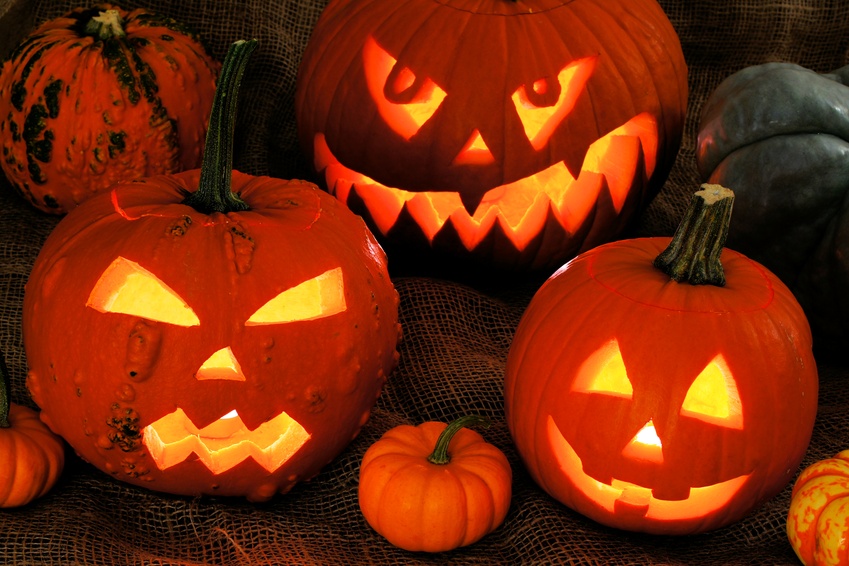 Pumpkins are still alive even after being harvested.  They release moisture from the blossom end, so whether you’re carving or storing your pumpkins, they need to breathe.  Setting a pumpkin directly on furniture or a non-porous surface won’t make your cucurbit happy, and it may not make your furniture very happy either.

Pumpkins purchased from a nursery, farm stand, or food market should already have been cured.  If you’ve grown and harvested your own pumpkins, take a look at the links below for advice on curing pumpkins properly.

If you’re planning to store pumpkins, make sure they have no signs of decay, nicks, cuts, or bruises.  Pumpkins with soft spots should be used or prepared and frozen immediately, rather than stored. Be aware that not all pumpkins store well.  Keep your pumpkins in a dry, well ventilated space.  The tricky bit is keeping the humidity at just the right level – too moist, and the pumpkins will decay, too dry and they will dehydrate.  If your pumpkin could talk, it would tell you that it prefers a storage temperature between 50-55F and humidity between 50-70 percent.  Pumpkins should be used immediately after removal from storage. 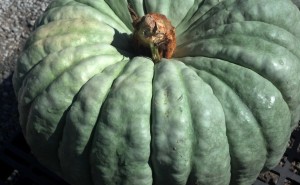 Jarrahdale pumpkins are excellent eating pumpkins and long-term keepers, often lasting six months or more in storage. Jarrahdale may be the perfect eating pumpkin to grow at home in our region, because it can take the heat. That’s why it’s so popular in Australia.

Many pumpkins are not stored or consumed immediately as food,  but are carved up as fall or Halloween decorations.  I’ve always been intimidated by any carving other than that required to slice a pumpkin into large pieces for roasting, or cubes for blanching and freezing (I’m definitely a pumpkin hoarder).  Fortunately, Martha Stewart’s website has just about everything you could possibly want or need in the way of carving tool requirements, how-to’s, templates, and inspirations.  The tools segment even gives examples of how each tool is used to alter the appearance of a pumpkin.

In a pumpkin shell, there are three basic techniques used to alter or carve a pumpkin – cutting, shaving, and scraping.

Cutting involves the removal of both skin and flesh, leaving an opening in the pumpkin’s surface.  The tools used in cutting vary from tubular hole cutters, to miniature and keyhole saws, to power drills. 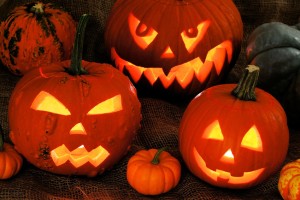 Jack o’ Lanterns are very popular Halloween decorations, but don’t carve up your pumpkin babies until a few days before. That way they’ll still look great on the big night. Watch for soft spots on the exteriors, indicating that rot is underway. (Image: © Jenifoto – Fotolia.com)

Shaving involves the removal of skin and some of the flesh, leaving opaque areas on the pumpkin’s surface that allow diffused light to pass.  Tools frequently used to shave a pumpkin are linoleum cutters and wood gouges. 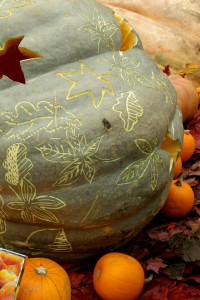 This centerpiece pumpkin was decorated with a leaf design using a linoleum cutter. Leaf shaped cookie cutters were used to cut all the way through the pumpkin to allow light to shine from within. (Image: © Trombax – Fotolia.com)

Scraping is much like sculpting – scrapers are used to remove skin and varying amounts of flesh in a very precise manner, allowing for dimensional images that permit multiple levels of diffused lights to pass through. 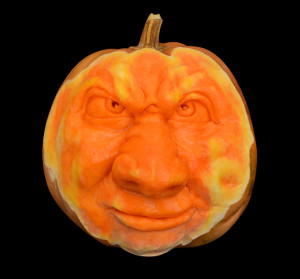 Using sculptor’s tools, pumpkins can be transformed into works of art or whimsy. The varying thicknesses of the flesh diffuse the source of light inside the pumpkin, enhancing its three dimensional features. (Image © andrey7777777 – Fotolia.com)

Whether you are a novice pumpkin carver, or a Cucurbita pepo artiste extraordinaire, once you have your pumpkin carved, you need to make sure your masterpiece sticks around for as long as you’d like it to.  Unfortunately, there is an expiration date on carved pumpkins.

There are some interesting articles on preserving carved pumpkins, some of which recommend applying petroleum jelly or white glue to cut edges, and others that recommend using either pumpkin preservative sprays or nothing at all.  The bottom line is, clean out the inside of your pumpkin very well before carving, and take lots of photos before the rot and mold set in.  If you’re lucky, your jack-o’-lantern could last two weeks, but it will definitely need botox by that point.

For information on curing and storage of pumpkins –

For information on carving pumpkins –

For information on preserving carved pumpkins –