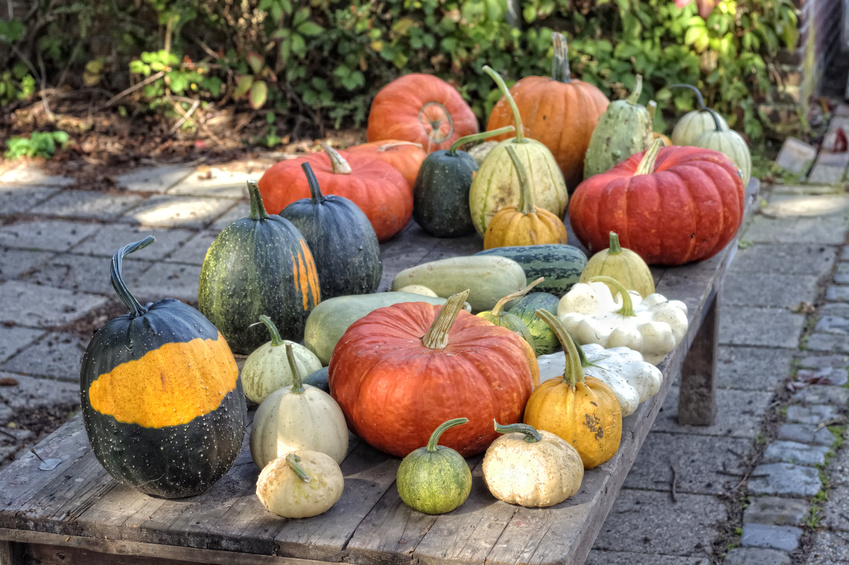 Pumpkins, which are squashes, are native to North America, and traveled first to France (where giant pumpkins originated), then to England, and then back into North America with the Pilgrims, in the form of pie filling.  Despite popular lore, pumpkin pie was not a part of our Thanksgiving dinner until the 19th century.  There is a vast diversity of pumpkins available, and many farms, produce stands, and nurseries now offer so many types of pumpkins, it’s difficult to choose which ones will work best for your purpose. 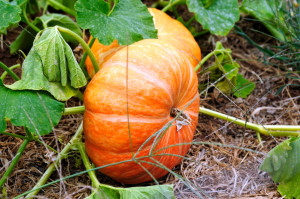 The beautiful French heirloom pumpkin Rouge vif D’Estampes is both decorative and delicious. In the US, it is commonly known as the Cinderella pumpkin. (© bendicks – Fotolia.com) 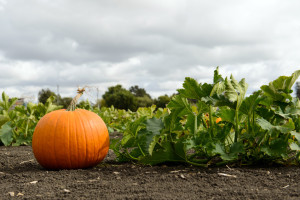 This pumpkin, curing in the field, could be either a cooking or carving pumpkin. Or even both. The best spherical pie pumpkin is New England Pie, an heirloom also known as Small Sugar.
(© Kenishirotie – Fotolia.com)

Some pumpkins are just made for jack-o’-lanterns, and some are perfect for pies, cheesecake, and soups.  And yet others are great for both decorative and culinary purposes.  What makes a pumpkin destined for carving or cooking?

It’s easiest to carve jack-o’-lanterns from spherical pumpkins, but as long as the seed cavity is large, and you like the shape, have at it.  Carving pumpkins range in weight from 10 to 65 pounds, and have strong stems. While jack-o’-lanterns are usually a deep orange, white pumpkins with either white or orange flesh are becoming more popular for carving.

Once you carve your jack-o’-lantern, it may be only a week before it starts to mold and cave in on itself.  In cooler weather they will last a little longer, but if you want to extend your fall pumpkin display, don’t carve up all your pumpkins.  Place a piece of cardboard underneath each pumpkin, as they will continue to release moisture through the blossom end.  This moisture will collect and either cause the pumpkin to rot, or mess up that lovely finish on your sideboard. 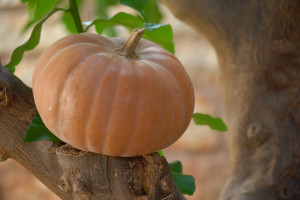 This North American heirloom pumpkin, Long Island Cheese, is the preferred pumpkin for pies. This pumpkin has very sweet flesh and keeps for up to a year. Cheese pumpkins are called so because their shapes resemble wheels of cheese. (© Torino Corso – Fotolia.com)

The best pumpkins for cooking have dry flesh, a high sugar content, and smooth texture.  They come in all sizes, colors and shapes.  Some of the smaller ones can be baked in a manner similar to winter squashes.  Pumpkin can be roasted or baked, either whole or cut into pieces, cubed and boiled, or cut and microwaved.  Cooked pumpkin can be pureed for pies and creamy soups; pumpkin cubes can be used in savory dishes, such as stews.  One of my favorite winter soups is pumpkin and tomato curry soup, which has just enough coconut milk to add depth, but leaves you guessing about the identity of that flavor.  Last, but not least, there are even pumpkins that are grown specifically for their delicious, sometimes skinless, seeds.

If properly cured and protected from frost, all uncut pumpkins can last a very long time outdoors and even longer in storage.  If you buy your pumpkins from a reputable source, they should already be properly cured.  All those pumpkins you see sitting upright in a pumpkin field are being cured.  It’s too easy to nick or bruise them by moving them out of the field before they’ve had a chance to cure.

Musque de Provence pumpkins, a French heirloom, are very flavorful cooking pumpkins. They are also known as Fairytale pumpkins in the US. (© gparigot – Fotolia.com)

Visit a vegetable seed website, or consult a catalog if you have one, to see which pumpkins make the best eats, and which make the best carvers.  My favorite listings of pumpkins, which are quite comprehensive, are on Johnnyseeds.com and rareseeds.com.