Meet The Beetles – And A Bug Or Two 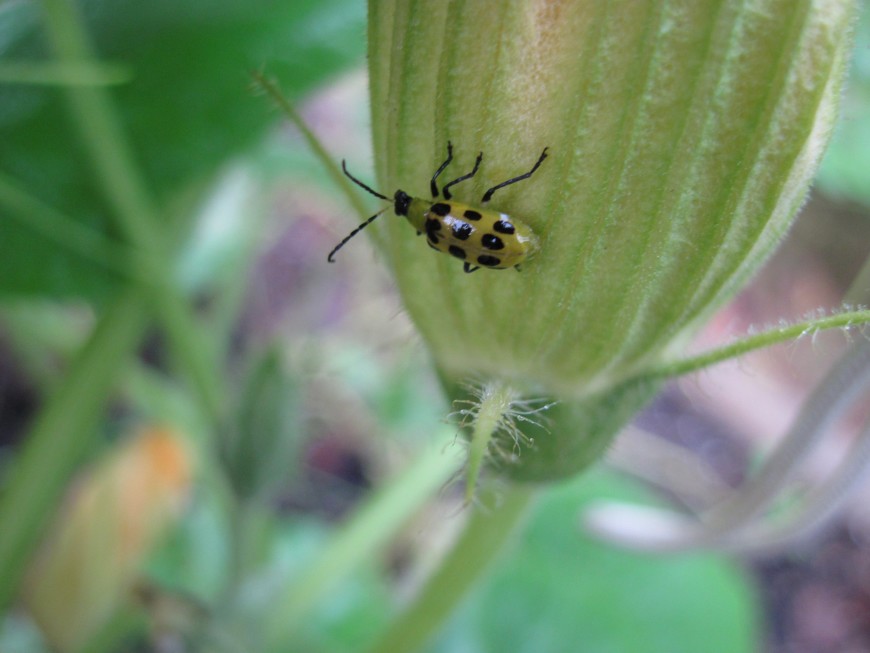 If you try not to use chemicals in your vegetable gardens, chances are you spent quite a bit of time this summer handpicking and squishing all sorts of insects, in all stages of life, from eggs to larvae to adults, from your vegetable plants.  The bad news is they’ve already planned their comeback attack for next year.  Let’s meet a few of our unwanted gardening companions –cucumber beetles, squash bugs, squash beetles, and Mexican bean beetles.

Cucumber beetles come in yellow and black striped or spotted varieties, which both share a fondness for just about anything in the squash family.  They do prefer cucumbers, hence their names, but they will munch on squash or pumpkin plants in a pinch.  Cucumber beetles lay their eggs in the soil at the bases of plants.

Squash bugs are dark brown, and resemble stink bugs, but the latter prefer tomatoes.  In any event, neither is 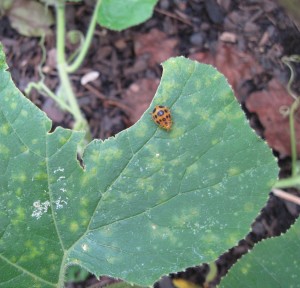 welcome in the garden.  Squash beetles are orange with black dots.  All three lay their eggs on the undersides of  plant leaves.  Like cucumber beetles, squash bugs and beetles will eat any member of the squash family.

Besides eating your plants, some of these pests also transmit the bacteria responsible for bacterial wilt, squash mosaic virus, as well as increase the likelihood of powdery mildew, black rot, and fusarium wilt.  Researchers are still discovering new plant diseases transmitted or facilitated by these insects.

As your garden plays itself out, it’s important to disrupt the lifecycle of these nefarious insects as much as possible.  Some of the adult forms of these insects are able to overwinter in the soil, and others lay eggs in the soil.  Remove and destroy any remaining crop vegetation, rather than composting it, to destroy the adults or eggs harbored there.  Cornell University suggests deep tilling, with an application of fresh compost, followed by a cover crop in the fall to further encourage the decomposition of any remaining crop residue.

Next spring, try using trap crops.  Trap crops are varieties known to be very attractive to the damaging insects, and limit the focus of your fight against them.  Some trap crops, such as blue hubbard squash, are also very resistant to the diseases that the insects bring with them.  Planting a small bean trap crop early in the season will draw the Mexican bean beetles, and when the plants are infested with beetles, tear out the plants, bugs and all, and dispose of them in plastic trash bags.  Now your main bean crop should be a bit safer. 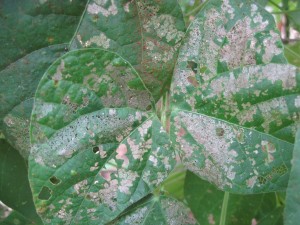 The damage to these beans was done by Mexican bean beetles, which are often mistaken for ladybugs or squash beetles.

Introducing natural predators into your garden will help, but it cannot be your only line of defense.   Birds, toads, frogs, wasps and flies all pitch in to control the above ground threats.  Releasing tachinid flies and beneficial wasps into the garden will increase your allies.   Nematodes and fungi will destroy at least some of the cucumber beetle larvae in the soil.

We have so many insects and diseases threatening our crops, ornamentals, and trees.  And we didn’t even get to squash vine borers!  There is a wealth of information available from many reliable sources on the internet.  We may not always find easy solutions, as is the case with the pests discussed here, but we can find what we need to improve our chances against them.

(Header photo: A spotted Cucumber Beetle settles for a winter squash plant after all the cucumber vines have been pulled.)