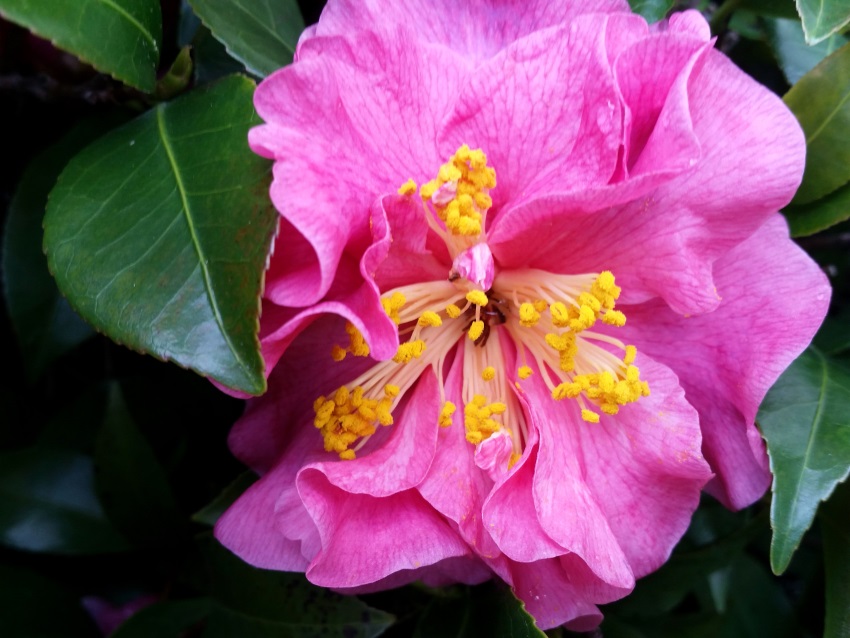 Spring arrives on Tuesday.  I’m finally “done” pruning my 19 fruit and nut trees, but that doesn’t stop me from barging out into the garden, loppers in hand, to remove some poor unsuspecting weak branch that I missed the first three or four times around.  I tend to err on the side of caution, so it usually takes three or four rounds of pruning for each tree, with the dead stuff coming off first, then the branches that rub the bark off the stronger ones, or impolitely reach across to the other side of the tree or straight up in the air as if desperately in need of a bathroom break, and then the really scrawny ones that are at least four feet long and couldn’t bear the weight of an overfed cardinal (which mine are).  My trees are so overgrown and I fretted that I wasn’t up to the task.  Then I read that it takes several years to recover overgrown trees, and that removing more than a quarter of the branches at one go is not such a good idea anyway.  So I did what seemed reasonable for now, and will do light pruning in the summer as necessary.  Just a reminder that downward facing spurs on fruit trees are generally to be removed, mainly because they’ll pull your hair out, based on my experience. 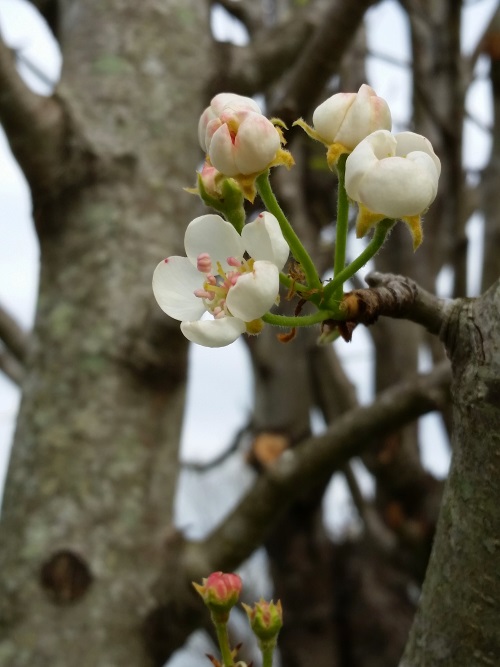 Pear blossoms are like tiny little lotuses, only on a tree. The blossoms form clusters on both pear and apple trees, and the rule of thumb is that the central blossom produces the largest fruit and the others should be removed to allow a single fruit to develop to full advantage. I’m going to wait and see which fruit grows the largest first, and then pull off all the others. Too many fruits in close quarters encourage disease and can overload the branch in terms of weight.

This month’s weather thus far has been a mixed bag, with several freezing nights after the peaches AND the pears had already bloomed.  In general, apples and pears can withstand lower temperatures than peaches because the fruits of the former are allegedly more protected from freezing by being situated deeper inside the blossom.  My peach trees bloomed again rather nicely after losing most of their blossoms and fruit, and the apples and pears seem mostly unaffected by the cold.  The cherries, however, are likely a bust.  The pecan trees don’t wake up until they’re good and ready, so they’re still snoozing. 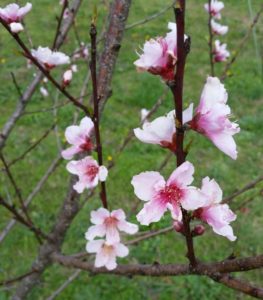 This is either an apricot or a peach, but the blossoms that froze during the recent cold weather were quickly replaced by new ones along the branches, closer to the main trunk of the tree. Peaches can tolerate below freezing temperatures during different phases of blooming, but it’s so complicated, I’d rather just wait until it’s all over and see what’s left on the tree.

In the vegetable garden, you can continue to sow cool weather lovers such as Swiss chard, carrots, beets, radishes, leaf lettuces, and turnips.  You can also transplant onions, brassicas, potatoes, and asparagus into the garden.  Some herbs can be planted out now, such as rosemary, chives, oregano, and thyme.  Wait until warmer weather for the more tender herbs.  By the end of the month, you can start planting corn, squash, peppers, and cucumbers.  I’m holding off even longer, especially on the tomatoes, basil, and dill, because the weather is a little too variable for my liking.  That, and I just don’t have the vegetable garden ready yet.  My perennial herbs are already taking over the vegetable garden as if they’re Bermuda grass.  I currently have enough oregano to last through the remainder of the year.

Petunias, snapdragons, nasturtiums, and dianthus, which can take a little cooler weather, can be planted during the early days of spring.  Daylilies, hostas, Shasta daisies, and cannas can be divided now.  It’s important to get to the hostas before their leaves start unfurling, because that just makes the task of division much more challenging.  Be sure to replant the divided perennials back at the same depth in the soil as they were growing before division.  The end of March is the last chance to prune roses, if you’re so inclined. I’ve had mixed results with pruning roses, so I’ve decided on taking the lazy approach – cut off the dead and weak, and deadhead once they start blooming.  After blooming, prune the azaleas, forsythias, loropetalum, and flowering quince.  If you wait too long to prune, you may be cutting off next year’s flower buds.  Deadhead your camellias to prevent disease, feed all the shrubs, and check for signs of disease and pests and treat with non-toxic remedies whenever possible. 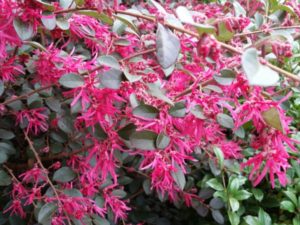 Loropetalum blooms in early spring, and has already burst into bloom here in lower Zone 7. The several freezes in early March have killed all the open flowers, but while they were intact, the fragrance was intoxicating. As was the intense color! Prune as soon as possible after blooming, and definitely before June. Loropetalum can be a very vigorous grower. But you already knew that, right?

There is more information in the sources listed below.  Hang out at least one hummingbird feeder even if you haven’t seen any yet.  I’ve had more honeybees in my fruit trees and at my hummingbird feeder than I’ve seen in years.  And before it’s too late, get out there and smell your peach and apple blossoms.  They have an incredibly fresh and sweet fragrance.