Hot Time, Summer In The City (And The Burbs) 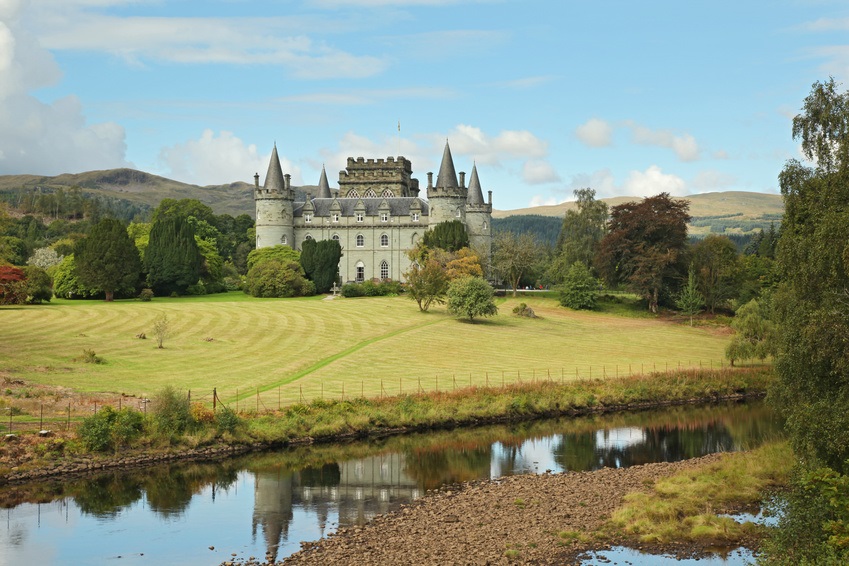 First, a brief history of lawns.  Then we’ll rant about how they are the single most wasteful use of water. (Just kidding.  But only a little.)  The word lawn may have evolved from the Middle English word launde, which described a naturally occurring opening between wooded areas, where a variety of low to medium height plants thrived in the absence of trees.  Laundes made it easier to spot one’s enemies approaching, so they were incorporated into areas surrounding walled towns and castles.  During the Renaissance, wealthy English and French landowners decided that lawns were quite the thing, so they had them designed by all the best garden designers and planted up in herby, spreading sorts of plants, such as thyme or chamomile.  Private lawns were only possible for the wealthy and powerful until some scheming real estate developers teamed up with some scheming landscape architects in the mid-20th century, as we’ll discover in the next paragraph. 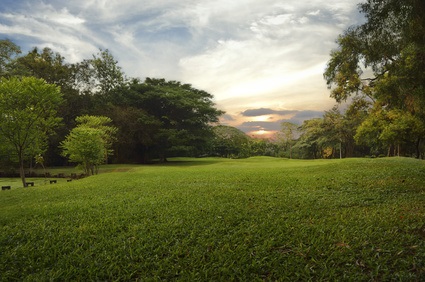 Natural open spaces inspired the design and creation of public and private man-made lawns. This trend began in Europe (where moister and milder climates gave advantage), and the concept was incorporated into designs of varying scope and scale here in the US, primarily during the 19th and 20th centuries. (Photo © grapestock – Fotolia.com)

Here in the US, lawns for the huddled masses didn’t really come into fashion until after WWII, when mass-produced affordable housing developments were sodded to entrap the newly minted middle class home-buyers in endless cycles of sodding, seeding, feeding, watering, mowing, and raking.  At the time, the primary objective was enforced conformity.  The mass-marketing of lawns also ensured that chemical manufacturers gained a huge captive market for all the new fertilizers and pesticides being developed after the manufacture of chemical weapons was severely restricted.  Thanks to some very clever marketing and manipulation we were hooked on grass, and most of us still are.

Have you figured out that as far as I’m concerned, outside of public parks and playgrounds, grass should only be planted along paths bordered by flowers, shrubs, and trees?  But I digress. 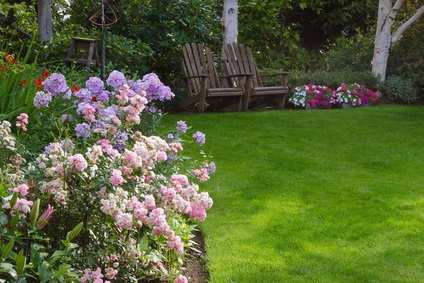 This partially shaded lawn should require less frequent watering than one exposed to full sun. Lawns bounded by perennial or shrub plantings make for great places to relax. As long as you don’t forget the mosquito repellent. (Photo© Jamie Hooper – Fotolia.com)

It’s time for all the asphalt waterers to come clean.  We’ve all unintentionally watered the driveway AND the street at least once.  The problem is, some of us keep on doing it, spending the equivalent of a small country’s entire annual GDP watering something that just won’t grow, period.  The average lawn requires 1-1.5 inches of water a week to stay healthy and green, and if the street gets half of that, well, need I say more?

If you (time for the pronoun shift) must lawn, here are some tips to help you get the most out of the watering bit.

Use hose-attached sprinklers or irrigation system sprinkler heads that deliver well-defined streams of water, rather than a mist.  Sprinklers that shoot the water on a more horizontal trajectory actually waste less water than those that aim for the sky.  But remember, watering asphalt and watering the sky are two of the definitions of insanity (according to yours truly).  Generally speaking, pulsating sprinklers are more effective waterers than oscillating sprinklers.  But when you’ve just converted your lawn to a baby grass nursery, remember to be gentle with the water.  This is one time using an oscillating sprinkler is the right thing to do.

Make sure you’re not wasting water on the driveway, sidewalks, street, or any other surface that doesn’t need to be watered.  I just had to say it again, didn’t I? 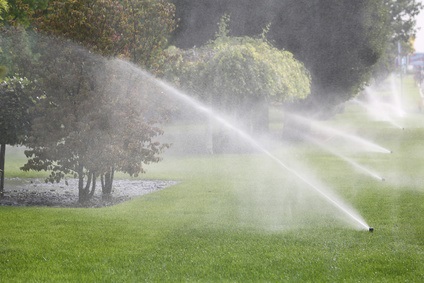 Bet there’s some serious asphalt watering going on here. Attempting to water the trees and the lawn simultaneously may result in losing water to mist evaporation and misdirection onto impermeable surfaces (which won’t grow no matter how much you water them). (Photo © Nebojsa Markovic – Fotolia.com)

If you have a timer-based system, make sure to adjust your watering schedule to fit the season.  You’re just wasting water and money if you’re still watering for the summer in mid-fall or winter.  Water early in the morning.  Not mid-day.  Not in the evening.  Whether it’s grass, shrubs, perennials, or annuals, soaking them late in the day just sets the stage for nasty diseases to mushify (that’s a technical term) everything in their paths.

When watering the lawn, make sure that the soil is moistened to a depth of six inches.  Most healthy turf sends roots down to that depth, but if you’ve planted traditional drought-resistant grasses, their roots may burrow down even deeper.   So you gotta dig up a spot and check, while paying attention to how long it took to wet the soil.  Then keep doing that.  Don’t overwater, and don’t pretend water (you know what I mean).  If you’re going to water, do it seriously.

Depending on your soil and conditions, a good soaking once to twice a week is all it takes.   Most lawns have the ability to go dormant in dry summer weather, and can usually withstand up to a month of drought.  Watering is a personal choice.  If you’re going to water, do it right, and do it consistently.  Don’t make your grass guess whether it’s supposed to go dormant, by teasing it with inadequate waterings.  You won’t like how it exacts its revenge.

Hopefully at least some of you have decided to rip out most of your grass and replace it with some lovely shrubberies, flowering plants, and trees from our nursery.  Yeah, I know I’m delusional, but I had to try.

Here are a couple of our previous blogs that address various summer-related hydration issues: